The biennale ¨Night’s of classical Music¨ was born in 2003 in a natural manner and in just the right moment and place, as do all things that seem predestined. Spending the holiday’s in my home city of Durres I would reunite every evening with my old friends from school. There, between endless talks, memories, beers and laughs, we would play the Mozart Quintets. In the end, we decided to interpret these beautiful works for the public. Right away we had support from the city council and of many classical music lovers. We chose a simple name, although it could have been even more exact, something like: ¨Night’s of Classical Music amongst friends and cold beers¨! Finally the festival took shape and was built over a clear structure. There are seven nights with different themes, like a promenade between different periods of music, including a competition for young talent: Night’s of Baroque Music, Classical, Romantic, Modern, Albanian, the Competition for young people and Carte Blanche. Each concert takes place in a particular, special, surrounding, like the Santa Lucia Cathedral, Archaeological Museum, Jozef Gallery, Aleksander Moisiu Theater, ¨Jan Kukuzeli¨ Music Conservatory, even in an abandoned factory in the outskirts of the city.

In contrast to the “20th Century Instrumental Group” which I direct since 1996, the project of the biennial in Durres is more ¨familiar¨, more intimate, it is music amongst friends. There is nothing more beautiful. In the end, this is the essence of chamber music. In this naturalness the whole structure of the Biennial is based. We have performed great works from the history of music such as ¨The Art of the Fugue¨ of Bach and ¨The Story of a Soldier¨ of Stravinsky. For each edition we commission a work, and the winner of the competition for young talent is invited by the “20th Century Instrumental Group” to perform in Spain. This group also performs regularly in the biennial, thereby creating a ¨sonorous bridge¨ between the two countries. In the last edition, the ¨ Night of Baroque Music¨ was dedicated to the Count Giacomo Durazzo (1717-1794), native of Durres, an enormous figure of the European cultural scene in the 18th century, who during his stay in Venice as ambassador collated the greater part of Vivaldi´s manuscripts, including the work the Four Season’s. These manuscripts only saw the light in the 20´s of the 20th century. And so, Durres, the Venetian Tower, the Count Durazzo, the violins of the 17th century, the instrumentalists from Durres, create a beautiful picture, a thrilling, moving, ¨colage¨.

All of this is a return for me; a return to my country, my city, to my youth and, at the same time, a closing of a ¨circle¨ where everything gains meaning. 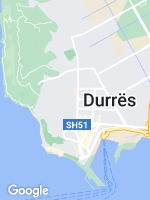